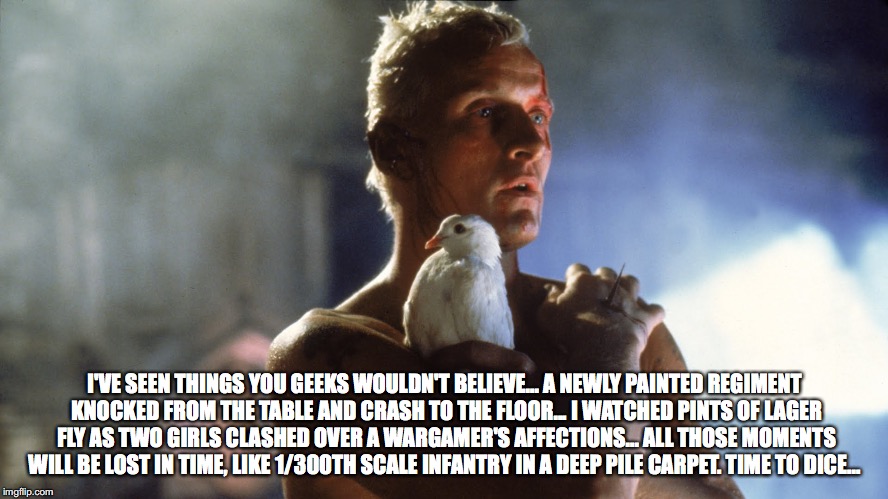 Of Vapnartak And A Change Of Opinion...

Well, as is the traditional start to the wargaming year, our happy band made our way from Sheffield up to York and the delights of the Vapnartak show.

I confess, that I was not planning any historical purchases at all but rather, hoping for some cheap and nicely turned out fantasy stuff on the tabletop sale.

That went right out of the window when, on the tabletop sale - which replaces the traditional bring and buy - I spied a 266 piece ECW army comprised of Bicorne and Renegade miniatures, painted to a strong and attractive - if not 'top drawer' - standard, which frankly, will look as good as anything that I cared to spend 500 man hours painting, when taken out at the local club under the usual dim, yellow lighting. Let's face it, at 46 years old and as a full time miniature painter, I am just not into spending my weekends painting after clocking up 50 hours in my studio. For me, it's all about gaming these days.

I will acknowledge that every so often I get a bee in my bonnet when some smart arse makes a comment about something I have on the table, and when that happens I will go out and buy an army similar to one they own, spend the time painting it all to the standard that won me 22 awards and then challenge them to a game, routing their amateurish works from the table.

But at the end of the day if someone wants a pissing contest, then if a simple disregarding manner fails, I'll go for the throat. I just don't have any time for people like that and my hackles rise... I know, I know, but that's one of my faults - I take things very badly, I always have.

Anyway, where was I? Ah yes... I picked up this army for a VERY reasonable £240 and a quick calculation will tell you that it was well below bare metal price, and therefore a bargain. I knew that it was a 'goer' because the light of my life simply said 'Buy it!'.

It was only half an hour later as I sipped a coffee that I suddenly and explosively exclaimed 'I DIDN'T BLOODY HAGGLE!' to the amazement and amusement of all those in earshot, earning me a 'look' from my beloved and raised eyebrows from my regular gaming buddy.

But despite my failure to play the hard-bitten Arab merchant, bargaining over a prime bit of camel, I'm really happy with it and have already begun to get it re-based from 'Impetus' elements to a more reasonable 20x20mm per figure using the truly excellent round edged 2mm MDF bases from Tony at East Riding Miniatures, who produces the best laser cut bases I have seen and which, are the only ones I would use for my clients.

Here's a couple of pics of the purchase: 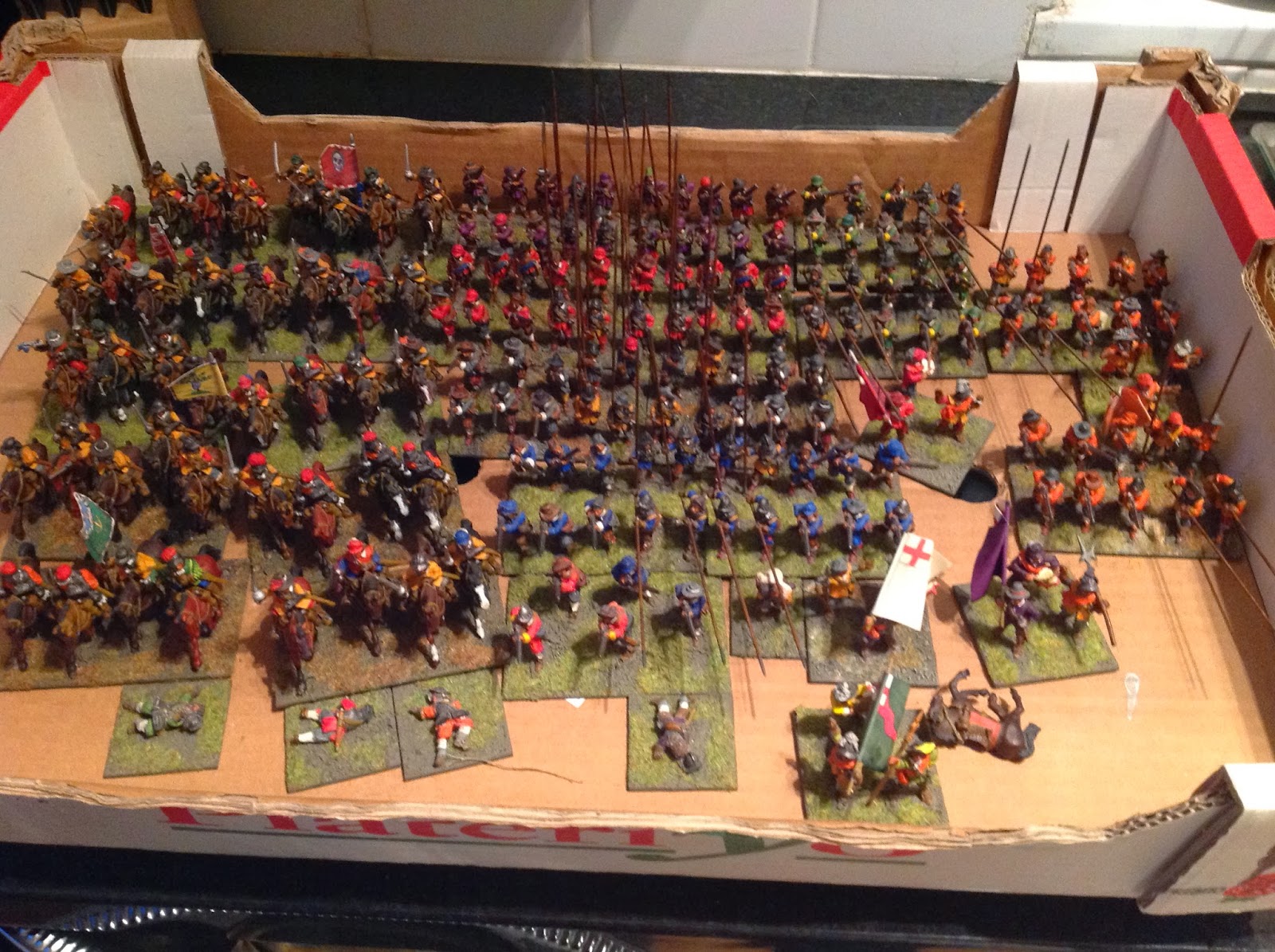 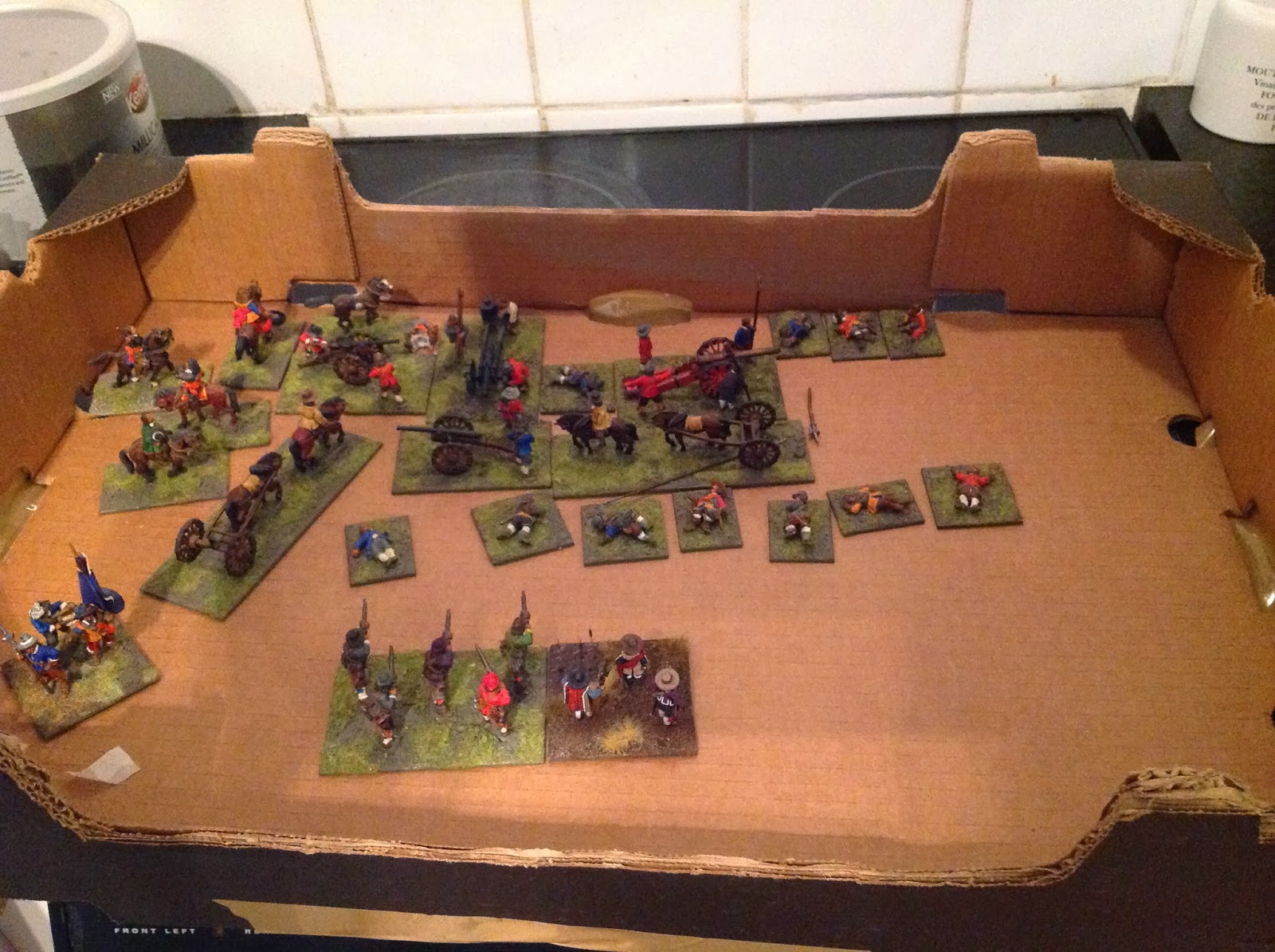 Now, this leads to the change of opinion I noted in the title of this piece...

Originally,  I had reservations about the tabletop format used at Vapnartak, after 3 years of seeing happy sellers, happy buyers and some really high quality stuff on offer, with a minimum of staff being needed to facilitate it, I would really like my own club to seriously consider this. I am a cynic by nature but I tell you, this system works!

My other two purchases were a 2nd Ed Warhammer and 2nd Ed Runequest set, both of which I was assured by the seller had missing components. At £5 each I took them anyway and when I got them home, just as I suspected the 'missing' items were right where they should be - Fixed into the rule books. And so, dear reader, the Warhammer is on my shelves with several other copies and the Runequest was sold for £25 ( a fair price for a complete set in near mint condition) which covered my costs for entry, refreshments, flock and the games I bought.

The Day The Sick Muse Died...

Last month marked the end of the monthly publication of Games Workshop's 'White Dwarf' magazine, a magazine which I and many others were so inspired by in the late 1970s and 80s, but which sadly lost it's way at the end of the 8th decade of the 20th century, when Games Workshop decided to concentrate on promoting it's own tunnel vision-like product range, which, whilst probably a source of enjoyment to those who came after us, left us cold and indifferent like a spurned lover.

I confess that I did my best to learn to love this new magazine, but over the years I have probably only purchased two dozen copies and each time, although I tried to look upon it with enthusiasm, it left me with the same sense of emotionless detachment that you might feel upon meeting a friend after an absence of twenty years, only to find that you both have little in common.

'White Dwarf' had metaphorically become that friend for me.

'White Dwarf Weekly' is 32 pages and at £2.40 per week means that Games workshop is effectively making twice as much as they did from the old magazine, and, whilst it appears to have less  blatant advertising, it is simplistic, almost insulting to a mature reader or even a literate youngster. Frankly, I have seen 'fanzines' that have made a better job of making the reader immersed in a fictional world. getting to the end of the magazine, it left me with a feeling akin to having purchased an adult magazine, only to find the centrefold removed. It was titillating, but did not give satisfaction. Indeed, I was reminded of a poor Sunday news supplement.

'Warhammer Visions' a 226 page 'B5' format magazine in full colour, seemed to promise so much. But again despite being packed to the covers with photographs of Games Workshop 'figure porn', some of it very competently executed in the style of the long lamented 'Fantasy Miniatures' books from the late 80s and 90s,  there were no literary 'money shots'. I had hoped for commentary and insights along with each gallery, but instead the reader is treated like a mental defective with descriptions in English, French and German which are redolent of the type of thing that 5 years olds were given to teach them to read in the 1970s.

A prime example can be found on page 54, with 'Gandalf The Grey is a wise and powerful old wizard.'

You see what I mean?

I half expected to turn a page and read 'See Faramir kick Gollum. See Faramir kick, see Gollum cry.' In fact, this would have been a distinct improvement, but is probably a little too advanced for the editorial team to risk themselves with.

And so it is with a sense of loss and regret, that I announce that indeed it is the end of an era in gaming journalism, without hope of another rising to take it's place.

It is the gaming equivalent of the political turmoil in Egypt... Alas, alas.

TTFN
Posted by Mark Hides at 11:25 No comments: